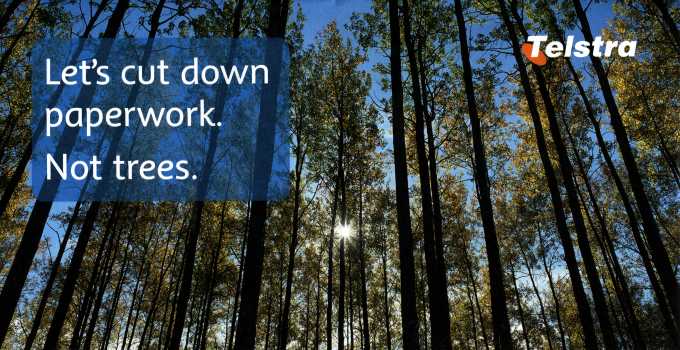 That's a good idea. Maybe you could start by, oh, let's say... not sending me this in a separate envelope on the same day as my bill. And by "me" I mean, most likely, "every single customer who receives a bill this month".

Apparently, At just two pieces of paper, the new-look bills will contribute to saving more than 30,000 trees... — unlike my current bill, which is already "just" two pieces of paper, which still seems excessive for a bill for four local and four mobile calls. (And it was only that many because of trouble with my recently replaced ADSL modem — hooray for VOIP!)

I suspected that this "streamlining" would not involve, say, better use of space (note the unused third of the first page, or the nearly two thirds of the second which is always blank).

I doubted that they would consider removing useless and misleading content — "Calling Number Display @ 6.00 per month" costs $3, apparently, as does "MessageBank @ 6.00 per month", the difference between the actual cost of $6 and the $12 the product description suggests being accounted for in a section titled "Discount Summary – for your information only" (except that it shows $5.45, not $6, because All Discounts have been taken off charges before GST was applied).

I expected that, knowing Telstra, they could simply make the bill less useful instead — and I wasn't disappointed: details such as call itemisation have been removed.

You can request a detailed bill instead of the new bill format. Given how little improvement this "streamlining" seems to offer, I suspect that it might even use more paper than the one I get now.

All timestamps are Melbourne time.